So I got a bit off schedule this weekend. I wrote about Friday on Saturday evening and then I didn’t feel like writing about Saturday.

Then last night I didn’t feel like writing. I am noticing that I am rarely in the mood to write on the day after I’ve written a much longer (and perhaps more emotions?) than normal post.

I started out intending to write about Saturday, Sunday and Monday in this post, but I got tired before I wrote about Monday. So here is my weekend update.

Saturday morning I got up and went to a 9am Pilates class. I normally go to an 11am dance class, but I was going to my retreat reunion meeting from 11-2.

I think I’m gaining an appreciation for the barre and pilates type classes. I am starting to feel a bit of a difference in my flexibility and balance, which is satisfying.

I enjoyed seeing my friends at the retreat reunion. It was inspiring to hear how many prayer requests had been granted or partially granted during the course of planning the retreat as well as actually during the retreat. The three big kids went to childcare at the church while I was at my reunion.

After the reunion, we picked up the baby who had been napping at Nana’s house and went home for a while. We had free time during the afternoon until we went to dinner at Hideaway with my mom. My dad was on a campout.

After dinner we came home and practiced our updated bedtime routine. They still aren’t used to it, but I’ve decided to read 1 book to each kid in the their own room, rather than reading 3 books (1 picked out by each big kid) to all 3 kids in the living room.

It is working out well for older daughter who craves the 1-on-1 time, but the boys are still cranky about it. I think it will work a bit better for me to focus on one kid at a time when my nanny leaves us.

I slept in while the kids somehow survived on their own. They are getting pretty good at this. We went to mass and even got there early. We took younger son (child #3) to the childcare room, at his request. I guess being in the child care room during the reunion on Saturday, he got acclimated to the room and decided he liked it.

Older daughter had a bit of a lapse in judgement by running ahead and going to the bathroom without asking while we were on our way back through the church after picking up younger son. I had a few moments where I didn’t know where she was and was not pleased. I told her how unhappy I was with that decision and decided that we wouldn’t be able to go out to eat for lunch because I had to be able to keep track of everyone to go places.

My brother and his wife came over about 1:30. Older daughter had been begging for them to come over to she could bake a cake. She had asked me to relay from pretty specific creative instructions for what supplies they needed to bring. 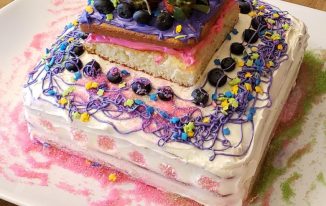 Older son decided he wanted to go to the gym with me so we left the other three home to hang out. The baby ended up taking a good nap for them and younger son played a board game with (and supposedly beat) my brother.

Older daughter had so much fun decorating her cake. I can’t even begin to describe how fantabulous (yes, spell check, I know you don’t like that word, but dictionary.com agrees it is a word) this cake looked, so I’m including a photo. Click on the image for a full size photo to see the whole top part.

I was just thrilled that I could leave for 2 hours ( decided to double up and go to both the Barre and Dance class) and come home to older daughter filled with joy at her creative expression and I didn’t have to clean up after it. In fact my kitchen was cleaner than when I left. Love my brother’s wife for that.

A Visit to My Grandparent’s House

After gathering the troops, we headed over to my grandparents with the top part of the cake to share. We ordered Chimi’s to be delivered for dinner and ate cake for dessert. The baby enjoyed the purple frosting the best.

Older son believed he say a mouse in their patio / florida room, so we texted my dad so he could take care of that.

We practiced the new bedtime routine again when we got home. We are still working on smooting out the edges.

This feels like one of the most boring posts I’ve written. I think I’m kind of okay with that. Sometimes it feels like I have been doing too much when I have a lot to write about. So it is nice to have a lower key weekend.