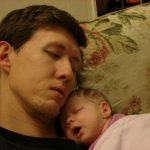 My husband, Kraston, was diagnosed with Glioblastoma (Grade IV brain cancer) in May of 2016. The historical median average survival time (how long 50% of diagnosed patients live after being diagnosed) is about 20 months after diagnosis, but he is young and strong.

He is also currently using the Optune device, which statistically increases survival time to 24.5 months. So his doctors are optimistic that he can survive a while, but every tumor is different, which is why his doctors have not given any specific prognosis for him.

We are praying that he will survive longer. We have been married almost 9 years and have 4 beautiful, ornery kids together under the age of 10: two boys and two girls.

My husband’s neurological symptoms started in January of 2016.

They started with these short episodes where he would pause for a few seconds in the middle of a sentence. After the pause he would say that he was still trying to talk but that he couldn’t. He saw his primary care physician in February who referred him to a neurologist.

The neurologist wasn’t very concerned, indicating that he thought Kraston was having silent migranes. Just on the outside chance that it was some kind of rare clotting disorder, he gave us the option to schedule a CT Angiogram of his head and neck. Since we were expecting our 4th child in July, the idea worried us enough that we decided to schedule the scan for March 10th.

By the time he had his followup with the neurologist, his symptoms had slowed down. The results of the scan were clear, so the neurologist still felt it was silent migraines.

The symptoms started getting worse the last week of April.

He went back to his primary care doctor who just referred him back to the neurologist. When Kraston called to try to get an appointment with the neurologist, they were booked up for weeks and just prescribed a medication called Gabapentin over the phone. The nurse said to try it and come back in 3 months if he wasn’t better.

Later that week he threw up in the car on the way out of town to visit his parents. He slept all weekend while we were there. His family was pretty freaked out the whole weekend. They insisted that if I couldn’t get him in with the neurologist the next day that I should take him to the Emergency Department.

I spent the next Monday morning calling various neurologists, but no one could get him in. I called my friend whose husband was an emergency department doctor. I asked if this was the kind of thing to go to the E.D. over. She said that due to the dearth of neurologists in our area, yes, if you have concerning neurological symptoms, that you should go to the E.D. So I told my boss that I leaving at lunch to meet my husband at the hospital.

I met my husband at the emergency department at lunchtime on May 16, 2016. 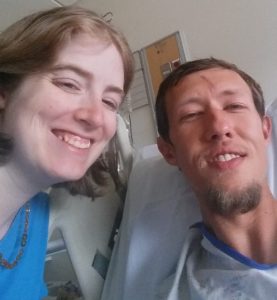 They took him back for a CT scan. It showed a large abnormality on one side of his brain. The ED doctor said that they were admitting him to the hospital and that they were scheduling him for an MRI. We didn’t really understand what was going on, so we told our families he was in the hospital, but not much more. We didn’t know how to explain anything else.

After the MRI on Tuesday, a neurosurgeon came to discuss the results. Kraston had a 6cm x 6cm tumor in the left side of his brain. The neurosurgeon could rearrange his schedule and do surgery the next day. So we started letting our friends and family know that Kraston would be having surgery on Wednesday.

After surgery, the neurosurgeon said he couldn’t be sure what the tumor was but the pathology should be back in a few days. That Friday, the medical oncologist came with the news.

My husband was diagnosed with Glioblastoma Multiforme (GBM) on May 20, 2016.

Before his diagnosis, I avoided researching brain cancer. There were too many unknowns. Once we had a diagnosis, I started reading.

I quickly learned that Glioblastoma is an aggressive cancerous brain tumor. As I mentioned at the beginning of this post, historical median average survival time (how long 50% of diagnosed patients live) for GBM patients is about 20 months after diagnosis. Given that before his diagnosis, he was about the healthiest 33 year old guy you had ever met, his doctors are quite optimistic that he can improve on that number.

Another important statistic that I will discuss in upcoming posts is progression free survival. This is the number of months after radiation ends before, statistically, the tumor starts to grow again (recurrence). Without the Optune device this statistic is 4 months and with Optune, it is around 7 months.

10 thoughts on “Intro To My Husband’s Glioblastoma (Brain Cancer)”