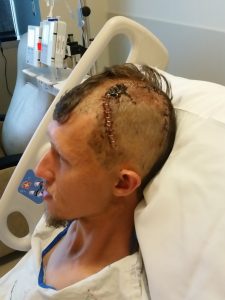 After Kraston was newly diagnosed, I spent the following 3 days (while he was still in the hospital recovering from his brain surgery) researching glioblastoma treatment options.

The very Sunday before his diagnosis, 60 Minutes aired a story about a promising glioblastoma treatment from Duke University involving the polio vaccine. Many people shared this information while we were in the hospital.

I discovered that this treatment was a phase 1 trial for recurrent glioblastoma. Phase 1 means the trial is new and experimental, testing for the optimal dose. Recurrent means the tumor has to have started growing again after treatment for a newly diagnosed tumor, meaning he did not (yet) qualify.

I did a little bit more research and compiled the following considerations:

Taking these factors into account, we determined that we would complete the standard treatment with home town oncologists. If he had a recurrence, we could consider a recurrent clinical trial like the Duke polio vaccine trial at that time.

Based on the size of his tumor, the standard is (33) treatments of 1.8 Gy fractions, for a total exposure of 59.4 Gy. So his radiation exposure would be approximately equivalent to 594,000 chest X-rays.

He would receive one treatment per weekday, so the 33 treatments would take him just shy of 7 calendar weeks to complete. The type of procedure was called intensity modulated radiation therapy (IMRT) and only took 10-15 per day.

The main side effect of the radiation was hair loss. His radiation oncologist recommended putting an ice pack on his head before and after the radiation in order to prevent permanent hair loss.

Starting the same day as the radiation, he would start taking an oral chemotherapy called temozolomide (TMZ) every single day until he stopped radiation. Since TMZ is a pill, he would get a prescription filled at a pharmacy and take the pill each night at home. He did not have to go anywhere for an infusion like most other chemotherapy.

The main side effect of TMZ is nausea. Kraston’s regimen to mitigate the nausea was the following:

One month after radiation ended, he would start adjuvant temozolomide. He got a new prescription for twice the original strength of the chemo pills. For 5 straight days each month, he would take this new dosage. He would do this for 6 months. The same regimen of anti-nausea medicines have worked for the increased dosage. 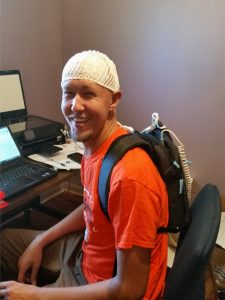 The optune device consists of 4 arrays hydrogelled to his head, with cords connecting to the device in his backpack. The device creates tumor treating electrical fields which confuse the cancer cells. They get so confused that they forget to reproduce and die off, reducing the total number of cancer cells.

The main side effect of this treatment is skin irritation. Kraston’s hasn’t been too bad.He has been able to maintain wearing the arrays approximatelt 90% of the time.

So there you have the glioblastoma treatment options for a newly diagnosed patient. At the time of publication of this post, Kraston has completed radiation and concurrent TMZ, 5 of the 6 cycles of adjuvant TMZ and 3+ months of Optune treatment.

Since his is coming up on 6 months progression free survival after completion of radiation, he has responded well so far to the standard treatment.