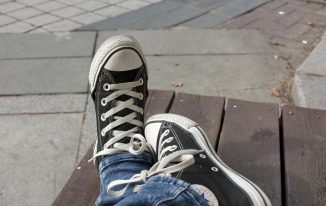 I’ll see if I can’t structure describing my day into a series of tips, since Tuesday Tips was the best alliterative phrase I came up with.

Tip #1: Talk to your kids about good pictures and bad pictures.

I somehow left this out from yesterdays post, but last night Rosemary shared at dinner that she thought she had seen a picture of a naked woman on someone’s phone when looking over their shoulder. Yes, my 6 year old said this with convincing detail. Already at 6 I need to deal with this?

I plan to read the older book to Rosemary and Ben each separately over the upcoming week, but in the meantime I brought out the Jr book and read it to all 3 big kids on the spot. When we got to the point where it asks if you’ve seen pictures of naked people, both Ben and Rosemary affirmed that they had. Sigh.

Tip #2: Enjoy giving your babies kisses when they will still let you.

Gabriel has decided to limit how many kisses I can give him per day. For the past few weeks it has been “Just 1, Mama” and he was the same this morning. He says he can give me two hugs and two kisses at drop-off but I can only give him one kiss. It is very unfair, lol. This evening though I did talk him into one in the morning and one in the evening. So I’m optimistic that I can talk him into more as time goes on.

Tip #3: Pay attention to how you use the phrase “single parent”.

My Bombshell workout group has a group text where we discuss various things, including when we will be going to the gym each day. I had an hour or so before I had to get ready for the gym this morning, so I decided to lay down and take a nap. My phone buzzed before I fell asleep. It was one of my workout group mates that I don’t know as well (and who thus doesn’t know I am widowed) who had sent out the following:

“Single parent status today with two sick littles = no gym for us today.”

At first I didn’t think it would bother me. People say stuff like that all the time.

I fought back the urge to make any uncharitable responses most of which include inappropriate language. I tried to close my eyes to take my much anticipated nap, but I just kept thinking of more uncharitable responses. Eventually my timer went off and I got up to get ready to go. I kept ruminating as I drove and by that point I was tearing up. I also teared up a bit telling one of my other group mates that the message had bothered me.

If you are married, you aren’t single, so please pay attention to how you use the phrase single parent, especially with people you don’t explicitly know their story.

In the realm of widow blogs and facebook groups, there is actually a bit of contention about using the phrase single parent for widows. Some like it; some don’t. Some prefer single parent, some prefer solo parent, and some prefer both.

I referred to myself as a single parent exactly once and didn’t like the way it felt. I felt it left too much room for the possible impression that Kraston had somehow chosen not to be involved in my kids’ lives.

I don’t feel like there is enough societal knowledge of the phrase solo parent to use it personally either, though I feel it is probably more accurate. To me it makes the most sense when there is no co-parent currently in the picture, whether through death, illness or deployment. Using the phrase “solo parent status today” would not have bothered much as much, I don’t think. If your husband is out of town on business, I feel that is accurately described as temporary solo parenting since you may or may not be able to consult him during that time on important matters.

However much I still cringe at the word widow, my therapist suggested, and I have since adopted, using the label “widowed parent”, since it is simply the most accurate and unmistakable.

Tip #4: A good therapist is the best thing ever.

Tuesday afternoon is my weekly therapy appointment. If you have tried therapy and it didn’t work for you, you probably didn’t have the right therapist. Therapists have personalities just like the rest of us and sometimes you click and sometimes you don’t.

My therapist sees both me and Rosemary, which is incredibly helpful. Rosemary has a very big personality and I don’t always understand her. My default parenting style works well for Ben, but not so much for Rosemary. Our therapist always has the best suggestions for what to do when I don’t know what to do with Rosemary.

Kraston, by default, was much stricter than I. So as a team, I was often the tempering agent to scale back his natural inclination to go overboard with consequences as we learned to parent with Ben. Ben is much more like me and did not respond well to Kraston’s strictness. I didn’t have to temper him so much with Rosemary as she responded well to the firmer boundaries. Rosemary needs much firmer boundaries and I just don’t naturally set enough for her. So I’m really having to work on it. Luckily my therapist is more than happy to discuss boundaries as long as I’ll listen.

Not everyone needs therapy, but if you are struggling with some aspect of life, find yourself a therapist that clicks for you.

Tip #5: Go to church more than just on Sundays.

I went to church twice today. I regularly attend the 9am mass on Tuesdays. I don’t remember exactly how I decided on Tuesdays and when I started, but I like going to mass at least once per week without kids so I can relax in God’s presence. I know my kids are welcome on Sunday mornings and don’t ruin mass, but it is nice to hear a gospel and homily sometimes. It is just like with my good friends. Often I like seeing them with both of our kids around, but sometimes we need time without the kids around.

This evening Rosemary and I attended Day 2 of the Parish Mission. Ben went to cub scouts with Grandpa Matt, my dad. I gave him the choice of the mission or scouts. He enjoyed the mission last night, but he chose scouts tonight. Gabriel was already tired at dinner, so I told him I was not inviting him tonight.

Rosemary enjoyed the talk (lots of great stories about listen to and trusting God’s voice), but really enjoyed the reception afterward. She talked to more people than I did. She also helped my friend Jackie pour lemonade and refill the water dispensers. Afterward she helped my friend Clare vacuum and clean up. She then asked if she could volunteer for the clean up crew tomorrow night. Daddy’s girl right there, friends.

If you are reading this tonight. say your prayers and go to bed. I will be a nicer mom tomorrow if I finish up now.