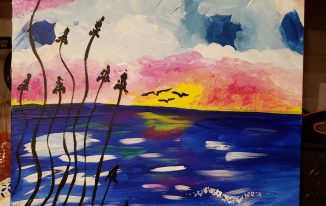 What a difference a year makes . . . painting and drinking wine instead of sitting in an ED waiting room for hours.

Tonight I did go with my trainer, and one other lovely lady from the gym, and painted a “Serene Sunrise”, while drinking wine. Well, I’m a lightweight, so I only had one glass.

I didn’t let any of my perfectionist tendencies get in the way of enjoying every minute of it. I’m getting a little bit better at being in the moment.

Somehow my first training session with Shannon came up. Her recollection was that I didn’t want to sweat or work very hard. I just wanted to be able to go up a flight of stairs without getting winded. She remembered thinking that I surely wouldn’t like working out with her.

Luckily I let my bossy trainer help me do what I actually needed, to work hard, and not what I thought I wanted. I only have two pair of jeans that fit right now.

I have a big stack of jeans that are too big now that I need to donate. I even went through the jeans up on the closet shelf that didn’t fit when I moved in. None of them fit.

In that stack were the jeans that Kraston helped me pick out at the Gap outlet in OKC the day before his second surgery. I had been putting off buying jeans that fit me after Eleanor was born. None of the jeans I had from before were big enough. I lost very little weight after she was born. So when we had some time after the Pre-Op appts and before we were meeting his family for dinner, he talked me into going shopping.

I had a foggy couple of moments earlier today when I realized those jeans didn’t fit.

The days just feel so long right now. This morning we got up early to get to the school by 7. I wore my outfit that my daughter and I picked out last night. It was cold. I just realized I didn’t write yesterday. I don’t really remember most of yesterday, so I guess I’ll just move on.

I drove my oldest, one classmate and his teacher to the Cherokee Strip Regional Heritage Center in Enid to learn a bit about pioneer life. He ground coffee beans, played with old school toys, applied for land run property, and washed clothes with a washboard.

A Year Ago Today 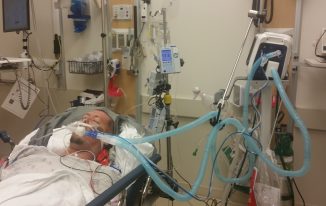 I took this picture of Kraston exactly one year ago, 11:51pm, in the Emergency Department at St. Francis.

I remember how he had been complaining all week about having “babysitters” when I was at work.

I took this picture with the express thought that I could show it to him later, so that he would know why I wanted to have someone with him in the afternoons.

He never woke up.

I never got to show it to him.

I don’t really want to go back any more right now to that day. I’ve covered it fairly recently in my post The Day I Became A Widow, so you can read that one if you haven’t already.

I wonder if year 2 will be harder than year 1. My therapist says I have done well these past few months, that I have done my grief work. So maybe it won’t be quite so hard as it is for some.

And I’m done for the night.