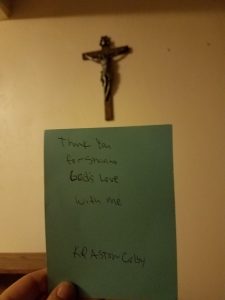 This afternoon is the beginning of the semi-annual Women’s ACTS Retreat at the Church of St. Mary. Kraston and I each attended our first ACTS retreat in the fall of 2015. It made a powerful difference in our faith lives. He went on to volunteer on the Team for the spring and fall Men’s ACTS retreats in 2016.

Even though he hated to write, he always took the time to write the requested “love letters” to the retreatants who attended each retreat. I have been sort of hit and miss, only writing notes about every other retreat.

Last Saturday evening, while away from home at a workshop, I had a bit of time after dinner and thought I might have some time to write some letters before my cabin mates returned. While packing I had decided to pack the old box of stationery, rather than the unopened one I bought last week.

I set out all of the card stock and envelopes, sorted them each by color. Yes, the silly engineer in me likes to do things like that. I counted each of the cards and the envelopes and realized that I had an uneven amount. My 5 year old daughter Rosemary had been into the cardstock, so I had more envelopes than cards.

I got my pen out, ready to get started. I picked up the first blue card and, for some reason, turned it over. It was a good thing I did, because it had already been written on. But not, as you might guess, by my daughter Rosemary.

Thank You for sharing God’s Love with me

I don’t know why he didn’t send this card.

Had he written too many?

Did he just forget?

Whatever the reason, I got a special message from him last Saturday.

My cabin mates walked back in shortly after I found my note. I picked up my stationery and put it all back in the box as I wasn’t going to be writing any of my own letters that day. I spent the rest of the evening talking with new friends, talking about him, and hearing about their losses and experiences with grief.

Moments like these, I feel God especially close to me, letting me know He is with me. I would love to hear about your latest God Moment in the comments below.