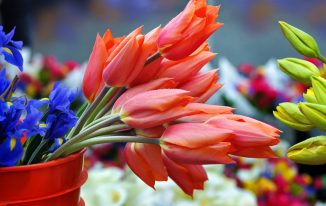 Yesterday and today were big days as expected.

We got up Friday morning and ate breakfast, packed and went to the gym. I didn’t really want to go to the gym, but decided that meant I would feel better if I did. When my primary reason for going to the gym is mental health, that makes it easier not to skip I guess.

I was supposed to be dropping in on a group training with some of my Bombshell group mates, but everyone else decided they were going to come at noon. So it ended up being kind of like personal training, which I was just fine with. When I was working out with a group, some people made comments about being glad for the group so they can hide a bit sometimes. I guess I’m not like that. I prefer one on one because I don’t want to hide.

I’m a (recovering, but still something of a) perfectionist and I want to make sure I’m doing it right. I don’t want to skimp on reps and I don’t want to hurt myself. Maybe it is also since I’m still pretty new to some of the things that we do and lack confidence and speed doing them by myself.

I was told many times when we were working out as a group that I was a bit intense. Maybe I am.

I never really thought of myself as a particularly intense person until lately. Another one of those things I think about maybe a little too often.

After I finished working out, I took a shower, blow dried my hair, picked up the kids, picked up bean burritos and cheese quesadillas at Taco Bueno, picked up cash at the credit union, took a potty break, got gas, and then headed west toward Fairview. Leaving town sometimes takes us a while.

We checked into the hotel in Fairview and unloaded the van. We setup the baby’s pack n play as I was optimistic that she would fall asleep in the van on the way back later.

We visited Kraston’s parents and aunt Katy for a while, ate some cheese pizza and headed to Okeene for Good Friday service. I had forgotten how long of a service it was, but I was glad I took the kids. I had never taken them before.

So I got to explain what we were doing while we were processing up to venerate the cross because it didn’t occur to me to explain in advance. Older daughter and I chose to kiss the wood of the cross, while the boys opted to bow. Younger son struggled with keeping his hands to himself most of the service, so we got to hang out at the back of the sanctuary most of the time.

After the service, I let the kids run around for a while to get some energy out and then we headed back to the hotel. As hoped for, the baby fell asleep and none of the other kids did, so I could carry her in and the others could walk their own selves in.

Luckily I went to sleep around 10 because all 4 kids were up bright and early at 6am. We all got dressed and headed downstairs to wait for breakfast to open up. The two big kids then swam a little bit in the postage stamp sized pool, we packed up, checked out and were headed back to Kraston’s parents house by 8:45. I look forward to them learning how to sleep in on weekends.

The Fairview town egg hunt was at 10. All 4 kids participated in their appropriate age egg hunt. All except eldest son came out with an official haul. Older son had a basket malfunction where every time he stooped to pick up an egg, he lost a few. He ended the hunt with only 1 egg. Somehow his aunt katy acquired him a few more eggs. So they all ended up with their fair share of treasures and candy.

We went back to his parents house for a bit until our next appointment. Grandma’s side of the family had a family potluck dinner at one of the church’s in town. About 50 people. The baby fell asleep in the car in the 3 blocks it took to get there, so I woke her up to eat.

After lunch we went to the park where some of the bigger kids had hidden ~460 eggs for the roughly 25 kids to find. The baby, again, fell asleep in the van on the way. This time I left the van running and let her sleep.

After collecting their share of eggs and taking a few requisite family photos, we headed back east. We ate dinner at the McDonald’s in Glencoe (the one on the middle of the cimarron turnpike that I never knew belonged to Glencoe until I had a flat tire there last year) and made it back before dark.

I put the baby to bed while the 3 big kids visited our neighbors.

I guess it wasn’t really that short today. I could probably tighten it up a bit to shorten it, but we are going to early mass in the morning for Easter, so I’m off to bed.