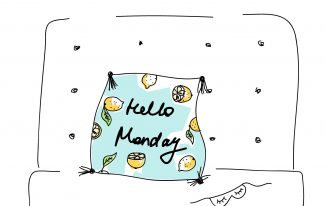 As previously noted, I was away on my ACTS retreat Wednesday through Sunday of last week. I returned yesterday feeling very loved and spiritually fulfilled, but very physically and emotionally tired.

I am still processing and not quite ready to write about my retreat. I am still kind of coming down off of the mountain. I would like to spend some time on my experienced, so I will post about it later , hopefully later this week.

So my post today will start with yesterday afternoon through today. I’m getting started a little later than I’d hoped, so this might be a bit short.

Yesterday after Patsy dropped me off at my house, I prepared myself for a long nap. I set an alarm for 3 hours later and ended up sleeping for about 2. I then went to my parents house to retrieve my kids. My mom had wonderfully agreed to keeping the kids a bit longer to I could nap.

After visiting with my mom for a few minutes, we headed over to my grandparents house for our Sunday Evening dinner. My grandpa was a bit confused and kept trying to go to the house. We assured him multiple times that he was home and that confused him further. We ordered in some Billy Sims BBQ as that is one of the better options on GrubHub for us.

After dinner, we came home and went to sleep pretty quickly. I did take a few minutes to look up and facebook friend some of my new ACTS sisters from the retreat. I also wrote down some notes by hand about my retreat in preparation for my retreat post that I will publish, hopefully sometime this week.

The kids were a bit cranky this morning as we tried to get back into the routine. We got to school right as the bell rang and my 3 year old didn’t want to get out of the van. So I had to carry him crying to the door.

The principal met us and assured me he was the 3rd child she had carried to class crying on this Monday morning, so I wasn’t the only one. Next I took the baby to school.

I had a one on one personal training session at 9am. Today’s workout involved sliders. It was difficult, which I guess is the point. It would be so much more difficult though if I didn’t enjoy and trust her as much as I do. She encourages me to do more than I ever thought I could do.

After the gym, I had to drop off my 3 year old’s lunch at school. With all the crying this morning, I forgot to grab it for him.

I’ve been considering signing up for an hour, but I’m not quite sure what hour I’d like. So this week I’m going to try a couple of different times to see how it feels. I go to Daily Mass tomorrow, so I’ll try a time on Wednesday I think.

Today after lunch I took a nap and headed to work. I had a bit of trouble settling down into working again after such a long break, but eventually I got a bit done. My boss has a new potential client coming through on Wednesday morning, so I ended up staying late to clean up / organize my desk a bit. I tend to get a bit messy. And by a bit, I mean kind of a lot.

I came home about 6:30 and got the kids ready for bed. My oldest was super tired and cranky. He ended up sleep walking an hour after he went to sleep trying to go to school. He ended up crashing in my bed. So I had to scoot him over just now to sit down to write this post on my laptop.

I spent some time visiting with my nanny this evening after the kids went to bed. I told her last week that I didn’t think I’d be able to justify to myself keeping her full time past July. Seemingly she has been fretting a bit that she hasn’t found herself a new job in the past week.

I assured her I didn’t plan on cutting her off that abruptly if she hadn’t found something yet. Things aren’t that tight. I just figured she have better luck finding a new job starting in August than in the middle of the school year. Perhaps it is probably a bit early for many parents to be looking for a new nanny for August.

I told her that if she found the right family and they needed care starting sooner than August, to go ahead and take it. I told her if she found someone looking for 25-30 hours per week, that I’d probably be able to budget up to 15 hours and that I could be flexible about it. I’d still like to do date nights with the kids once per week.

I’d still like help with bath time a couple times per week. I don’t want to go back to doing it all alone all the time. I just feel like I am ready to cut back and save a bit of money.

If you know anyone looking for a full nanny, I can put you in touch with her.

Well that didn’t end up being all that short I guess. Glad to be getting back in the habit of writing.